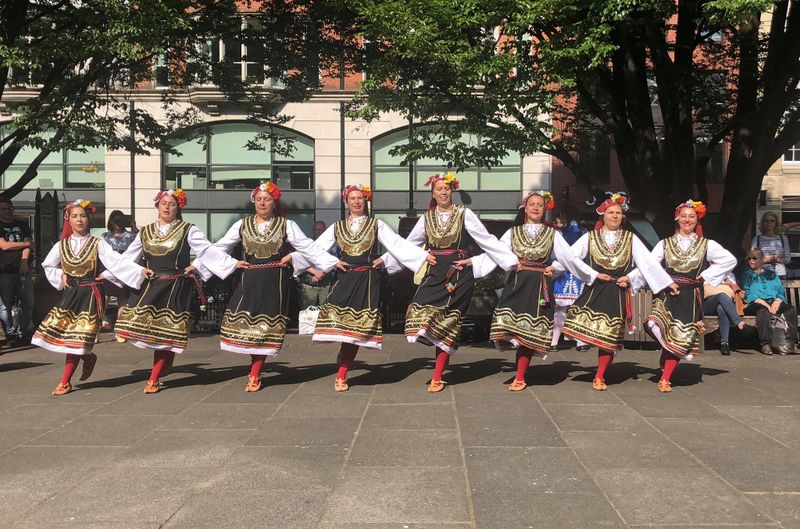 Bulgarian Londoners present a festival of Bulgarian culture, celebrated with a series of events on 19 May 2019 aimed at all Londoners.

The Bulgarian Festival will take place at Golden Square in Soho on Sunday 19 May, from 1pm to 5pm. A stage programme will feature professional Bulgarian musicians and dancers living in London and pupils from Bulgarian language schools in London; there will be books by Bulgarian authors in English for sale, as well as Bulgarian arts-and-crafts products to buy, details about special interests tours to Bulgaria to undertake, and traditional Bulgarian finger food to try – all celebrating the contribution of Bulgarian Londoners to the cultural diversity of the capital.

The festival takes place in the same square where last year Bulgarian Londoners planted Bulgarian and English rose species as a symbol of friendship between the two countries, both of which have the rose as their national flower. A plaque marks the spot in Golden Square where Bulgarians made this first give-back-to-London action.

The Festival is under the Patronage of HRH Prince Kyril of Bulgaria and Prince Tassilo of Preslav, and is organised in collaboration between The London Bulgarian Association, The Bulgarian City Club and The British-Bulgarian Society with Westminster City Council. Councillor Jonathan Glanz will be present.

The London Bulgarian Association seeks to give the Bulgarian diaspora in London a stronger voice in reflecting the successful integration of Bulgarian migrants into British society.

The Bulgarian City Club seeks to facilitate the exchange of ideas and information among professionals having business and personal interests in Bulgaria. The Club works for the promotion of the image of Bulgaria in the City of London and in the United Kingdom. In 2012, the Club organised the building of a spring-water fountain in Hyde Park in London.

The British-Bulgarian Society celebrated its Diamond Jubilee in 2012. It is a non-political organisation that aims to promote understanding and cultural relations between the people of Britain and Bulgaria.

The Day of Bulgarian Culture and Cyrillic Script is a national holiday in Bulgaria. It is celebrated annually on 24 May, which is a non-working day in the country.

In 2018, the London Bulgarian Association completed a survey about the life of Bulgarian Londoners. The survey results were presented at City Hall on 5 May 2018. The first survey of its kind, it asked 151 Bulgarians questions exploring their social status, when and why people migrated, and the scale of their integration into UK society. It found that cosmopolitan life in London has made Bulgarian immigrants more tolerant of diversity. At the same time, some Bulgarians revealed worsening attitudes towards them in the past couple of years, citing hostility and discrimination in the NHS and on public transport. But though the uncertainties over Brexit are causing some anxiety, most of those surveyed said that they are not changing their plans for the future.